Otherworldly soundscapes, foreign synthesizer frequencies and introspective lyrics put to a beat. These are the identifiable elements to Emberlynn Bland’s unique electronic music. Born and raised in Calgary, Emberlynn is a drummer/music producer whose goal is to bring softer soundwaves to the world of EDM. She enjoys immersing her listeners in unique experiences of sound while telling stories of love, identity, and being happily lost in the depths of space. Her alias ‘Goodnight Girl’ is the focal point of her artistic visions.

Emberlynn started her electronic creations in high school and has since participated in various community groups to play drumset in Jazz, Latin and Funk styles. She has continued producing electronic music as she attends post-secondary with her end-goal being a degree in Sonic Arts.

At the moment, Emberlynn is developing a repertoire of live performances, taking her 4 LPs worth of experience to the stage as a solo performer. She is also working with local electronic artist WanderingAria to experiment with creating live electronic music as a duo. Emberlynn also enjoys arranging duet versions of indie-rock songs with her partner JM. 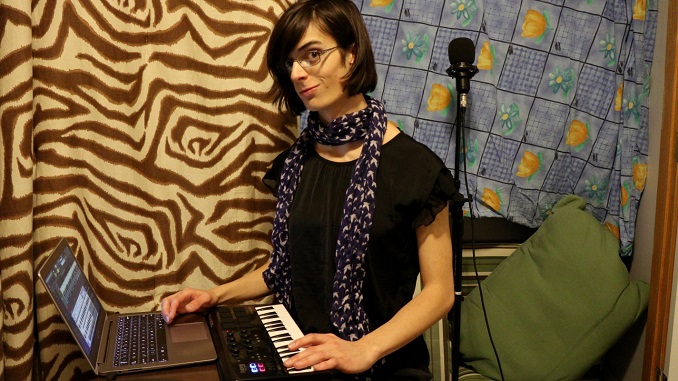 Niko’s Bistro in Kensington. It’s pricey but it’s so satisfyingly worth it.

AC/DC and Rush equally. I was really into classic rock as a kid.

Animal Collective. I got to see them live in the MacEwan Ballroom and it’s by far my favourite concert I’ve ever been to.

Forget to bring water and end up buying water at the local concession stand. I will never learn.

I Am The Mountain

My Bandcamp, my Tumblr and my Soundcloud. I like to use the last two to post demos outside of my usual genre-style and share the music that my friends make.

Next week at the Studio Bell Main Stage on Sunday, December 16th (2018) from 12:00pm-1:00pm. I’ll be there with some friends performing in groups and individually for our Jam Club Showcase. I’m also finishing up an experimental punk-rock album that I’ll signal boost on social media when it’s out in February of 2019.

Tinywiings is a Canadian rapper/songwriter/poet. As a child, she had a deep love for writing and found her passion for poetry at only age 7. Eventually, this passion evolved into her love for rapping and […]

Kate Stevens is an emerging folk artist from Calgary, Alberta with an eclectic mix of emotive 70s folk & soulful pop. Her sound can best be described as if Amy Winehouse and Carole King had […]