We had the chance to catch up with Braden Lyster (AKA: Troo Knot) about his comedy style, influences and his annual theatre show “Troo Knot – SPICY!” 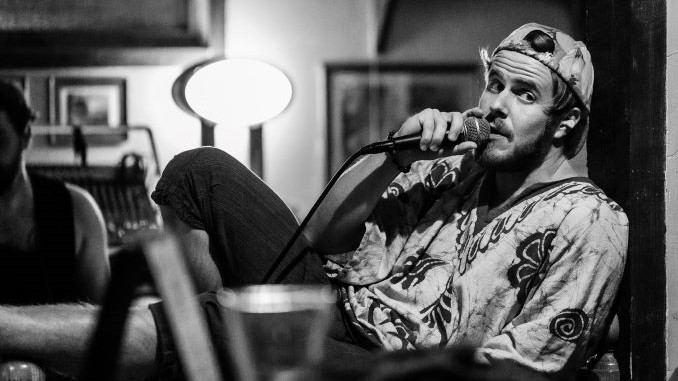 Wild, absurd, playful. I put a lot of thought into the writing but once I’m on stage I just become a crazy person. Writing is for thinking and the stage is for playing.

Reggie Watts is definitely the artist who inspired me to get up on stage and play with comedy/music. He improvises everything and that kind of freedom on stage totally captivated me.

I was like, “Oooh I can just get up on stage, be ridiculous, and see where it goes?” Then I got hooked. My style has changed over the last 8 years of performing but improvising and ripping off Reggie Watts was where it all started.

Jim Carrey. Ace Ventura, Dumb and Dumber, The Mask, Liar Liar, Cable Guy, come on! The amount of funny that guy blasted into the world is unmatched.

Fahim Anwar’s 1 hour special “No Business Like Show Business” makes me laugh more than any other stand-up I’ve seen online.

I rehearse my set all week leading up to the show. Then on show day I just relax and enjoy the other comedians until I go up. I’ve learned over the years that if I put the work in before show day then show day can just be a celebration rather than a panic attack.

Yuk Yuk’s in Calgary. It’s a real comedy club. The stage, sound, room, staff are legit and the crowd is there for comedy.

Dale Ward hosts a pro/amateur night there every Thursday night. Touring professionals and first-timers all on one show. It’s so fun and I try to get up there every week.

Tickets are like $5 and it’s one of the coolest nights happening in Calgary.

It’s real, honest, and people keep laughing at it.

Probably podcasts. Whiskey Ginger and We Might Be Drunk are a couple gooders.

Land Acknowledgments at the Stampede.

Troo Knot – SPICY! My annual theatre show. I have a dream team of local dancers throwing down to my original music and I’ll be doing stand-up throughout the night and filming all of it.

It’s the one show of the year where I invite everyone I know and put everything I have into it. Please come 🙂

Conner Christmas blew Broken City away with his Just for Laughs set.

“A Day in the Life” with actor, comic & filmmaker Spencer Streichert

Spencer Streichert was just a small town boy, living in a lonely world. After a successful run at bull riding that ended with a bull successfully jumping on his face, he decided to pursue different […]