Set in the Great Plains of North America in the early 1700s, the film Prey markets itself as a prequel in the Predator franchise. The original Predator movie directed by John McTiernan and starring Arnold Schwarzenegger was characteristic of the many pumped-up, hyper-masculine, guns-with-limitless-bullets stories of the 1980s. The plot of Prey has echoes of the former film. In fact, both films start as a rescue mission whose plotting is intercepted by an alien predator, a creature from another world who will destroy anything in its path. But this is where the differences end. Prey thwarts our expectations of what we can expect from this series. It’s novel, it’s subversive, and it just might be better than the original. 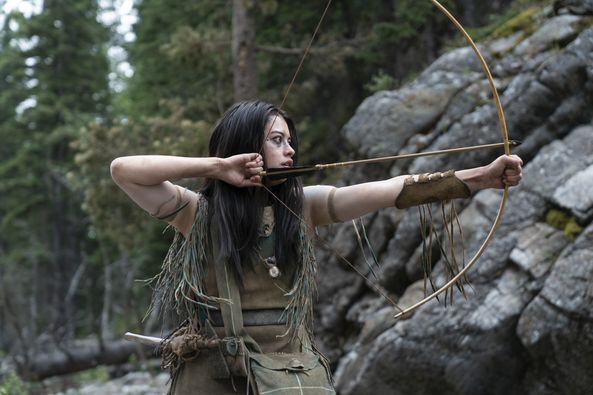 The story follows the character of Naru, a young female Comanche who aspires to be a hunter like her brother Taabe. Her desire to be taken seriously offers a strong narrative through-line in the film. While mocked by most male members of her tribe, she is humiliated after falling from a tree and getting knocked out after being pursued by a cougar. This event seems to seal the judgment of the rest of the tribe: Naru simply doesn’t have what it takes to be a hunter like her brother Taabe.

But Naru knows something the others don’t. There is something out there. She’s seen the tracks. They are big. Bigger than a grizzly. She’s also noticed a snake that’s been skinned alive. While underestimated by everyone else, Naru sets out with her dog, Sarii and plans on finding and killing this strange creature herself.

This film has a real feeling of authenticity. One of the reasons is the casting. Except for a group of white French fur trappers, the entire cast is indigenous. Amber Midthunder as Naru has rightfully been commended for her performance. She offers pragmatism and ingenuity that offers a smart counterpoint to how male warriors do their business. Dakota Beavers as Taabe is also excellent. His balance of hubris and sensitivity towards his sister make up special moments in this film.

And Director Dan Trachtenberg and screenwriter Patrick Aison have done something special concerning gender politics. They’ve made this a film whose strength of a protagonist relies on the perception of being nonthreatening. Even the monster itself walks past Naru to get to more formidable male opponents. This is a film that could have easily gone the route of Zena Princess Warrior, but it doesn’t play in that field. It avoids those pitfalls. Naru’s willingness to understand how males view her gender allows her to be a real smart adversary. 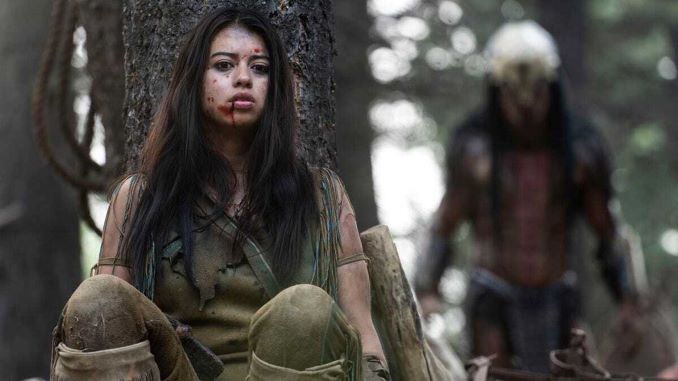 I watched this on Disney Plus from the comfort of my own home, but at times the cinematography, shot in anamorphic format, made me disbelieve the dimensions of my own television. Jeff Cutter relishes some of these wide shots. He takes the viewer into mountains, meadows, and rivers. Everything that makes Alberta one of the greatest places on earth to shoot a film. But, Cutter also relishes in the gore, and this movie has plenty of blood, guts, and science fiction violence. It makes a surreal contrast to the beauty of Stoney Nakota land.

Trachtenberg also adds a crucial ingredient which at first seems to be all about action, but in fact, is one of the film’s main thematic and narrative conceits. In the practice of throwing a tomahawk, Naru improves on the weapon by tethering a rope to the handle for quick retrieval. Retrieval is a core concept here. Naru joins the rescue party in the retrieval of her lost tribesman. Flowers are retrieved from the forest for medicinal purposes. Naru’s dog, Sarii is retrieved from the dangerous fur trappers, and multiple other examples.

But one aspect of retrieval might be accidental and yet welcomed. The retrieval of a fresh new concept in the Predator franchise.

Prey can be seen on Disney Plus. Content Warning: Gore and Violence.

Britches on a Branch: Legend of the Underwear Tree

Sometime around the middle of the twentieth century a new species of tree was found blooming in the vicinity of a mountain resort. This tree was unlike any other plant species previously discovered. It would […]

Photography has long been a passion of mine. The ability to capture a single moment in time simply with the push of a button is pretty incredible. Technology is always changing the way we shoot […]

Historic Photos of Skating from Across Alberta

Have you ever heard of wild ice skating? To put it simply, it’s skating on a frozen lake. In the Canadian Rockies, a trifecta of ideal conditions are needed to make that perfectly smooth, crystal […]