For our latest Charitable Choice post we spoke with the folks over at Art Commons about the great work they do providing a dedicated arts venue and space to local creative groups and organizations. 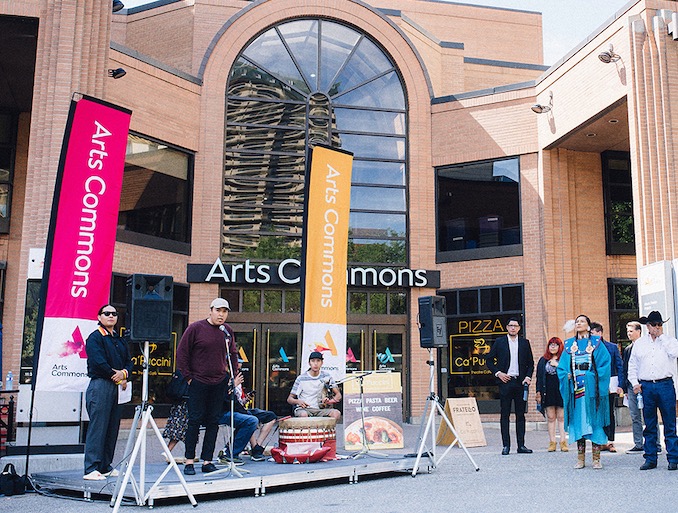 For 34 years, Arts Commons has been a key contributor to the social, economic, cultural, and intellectual life and well-being of Calgarians and visitors. The arts bring people together, increase understanding, empathy, and resilience, inspire creativity, and activate imagination, ultimately leading to new possibilities.

Arts Commons also provides a home to six producing and presenting resident companies and over 200 community groups, allowing Calgarians and visitors to experience the magic and inspiration of the arts in a variety of ways.

Arts Commons also supports emerging visual artists. Through the RBC Emerging Visual Artists program, Arts Commons provides an exceptional opportunity for emerging visual artists to develop their artistic practice, showcase their work through public exhibitions, an open studio, and speaking engagements, and to hone their professional skills. The 2018-19 season was the first formal season of the RBC Emerging Visual Artists program, but Arts Commons Presents hired 720 artists from all disciplines during that year.

Arts Commons is an inspirational gathering place for all Calgarians and visitors alike. We are a space, both physical and metaphorical, that stimulates senses, triggers emotions, challenges assumptions, starts conversations, and opens minds.

I joined Arts Commons in January 2014. I was very familiar with the organization and it was my goal to work there and serve the community. The organization was a strong presence in my life growing up and the history of the organization is a good example of how a few passionate and invested citizens can truly make a difference.

In 1969, the need for an arts centre in Calgary was first documented, following a study that determined that the Calgary Philharmonic Orchestra, Theatre Calgary and Alberta Theatre Projects were in serious need of a proper performance space in anticipation of their growth, as well as the increasing needs of the community. In 1976, The Calgary Centre for Performing Arts (CCPA) was officially registered as a charitable organization. While the Centre was planned in the boom years, it was built during a recession.

Three women were instrumental in establishing and raising funds for the backbone of the facility: Dr. Martha Cohen, Sandra LeBlanc, and Vera Swanson. In 1983, CCPA moved into its first official offices, in former City buildings located on 7th Avenue at Olympic Plaza. These buildings have since been torn down. In July 1985, CCPA offices moved into the existing building. For the first two months, staff wore construction helmets, as the building was still a construction site.

On September 14, 1985, the CCPA was officially opened with a televised gala celebration. The entire building was wrapped in red ribbon, which was cut by Dr. Martha Cohen, Vera Swanson and Sandra LeBlanc. In 2001, the Centre’s name changed when EPCOR Utilities Inc. entered into a ten-year naming agreement. Through this agreement, EPCOR – an Alberta-based utility supplier – supported EPCOR CENTRE’s vision to foster a culture of creativity in Calgary.

In 2014, the Centre rebranded to Arts Commons, representing “the Arts” which expands our offering to both include and reach beyond the performing arts to a wider variety of arts and genres. “Commons” is derived from the old town square concept where ideas are shared, people from all walks of life gather, and different perspectives are welcomed – the perfect name for our space.

The Arts has always been an important part of my life. Some of my very first memories are of going to a Fred Penner concert, or attending the Calgary International Children’s Festival. Arts and culture are essential to the happiness and well-being of any community, and we’re lucky in Calgary to have such a vibrant arts scene, and a central place like Arts Commons that is accessible and open to all. The arts ARE belonging and being part of creating a sense of belonging for all is what made me want to get involved.

When I started at Arts Commons, we had two music series and the National Geographic Live speaker series through Arts Commons Presents. There were seven resident companies, including the Calgary International Children’s Festival.

Since the Calgary International Children’s Festival closed its doors, we are now six resident companies. All the resident companies have grown and evolved to better serve our growing and diverse community. Today, on an annual basis, through Arts Commons Presents alone, we serve 200 organizations on average who host their events with us; we host more than 1500 events ourselves; and we had over 1600 volunteers engaged over the past year. Arts Commons Presents has grown to include TD Jazz, BD&P World Stage, PCL Blues, National Geographic Live, National Geographic Live Education, a robust emerging visual arts program, many free events and presentations, and many Arts Commons Presents special presentations. The resident companies also serve our community in a number of similar ways, each contributing in their own way to share the arts for the enrichment of our community.

For 34 years, Arts Commons has been a key contributor to the social, economic, cultural, and intellectual life and well-being of Calgarians and visitors. The existing facility has been enormously successful, consistently working far beyond industry standards. However, the facility is working much harder than the design intended, bringing all the major infrastructure to the end (and beyond) of lifecycle.

According to the Building Condition Assessment and Asset Management Plan that were produced with the assistance of The City of Calgary, $71M in critical lifecycle and accessibility issues have been identified. Furthermore, we are unable to satisfy the market demand for access to our facility, and are currently turning away some 600 critically important revenue-generating events annually.

Together with input from all Resident Companies and other stakeholders, a shared vision for the expanded facility was created – a civic arts centre that would be more accessible, vibrant, and integral to the community. The Functional Program of ACT was determined following extensive collaboration by Arts Commons with Bing Thom Architects, 11 construction industry consultants, and resident companies.

At the direction of The City of Calgary, the Calgary Municipal Land Corporation (CMLC) recently completed a review of the functional program and determined the total project cost of Phase One of ACT to be $240 million. Phase One is the building of the new facility and Phase Two is addressing the lifecycle issues and creating a more sustainable model for the current facility.

Federal dollars are available today and the federal government has approved $80 million in funding for this project from the Community, Culture and Recreation program, contingent on the City and Province contributing the remaining dollars needed to complete the project. The City of Calgary has already committed $25 million through the Municipal Sustainability Initiative (MSI).

Visit our website at artscommons.ca/actnow to learn more about the project and sign the letter of support. NOW is the time to invest in ACT to ensure our collective financial sustainability while better serving the needs identified by our growing community. Today, more than ever, we need to find ways to build a more creative and compassionate society. ACT is the platform to help realize that vision.

Meoooow, I’m Mittens! The puuurfect home for me would be one that is calm and quiet and where I am the only feline resident. I’m looking for a cat-experienced home who is able to read […]

From Police Outpost To Modern City

What was it like to stand in the middle of a wide open prairie and imagine a city?                ~Inscription on Mountie statue overlooking Fort Calgary. The confluence of […]

Hey there! I’m Tinker! I am a handsome fellow just looking for the purrfect furever home. My ideal home is calm and quiet with less foot traffic and other noisy animals around. Loud noises and […]