With a golden voice that fills a room with warmth and honesty, Jennie Harluk captivates her audience from the very first note. She would say above all else, music is what moves her heart and soul and her passion is to share that love through her songs. Her home is the stage, and whether it is a crowd of thousands or an intimate gathering her only desire is to make her listeners ‘feel something’ when she sings. 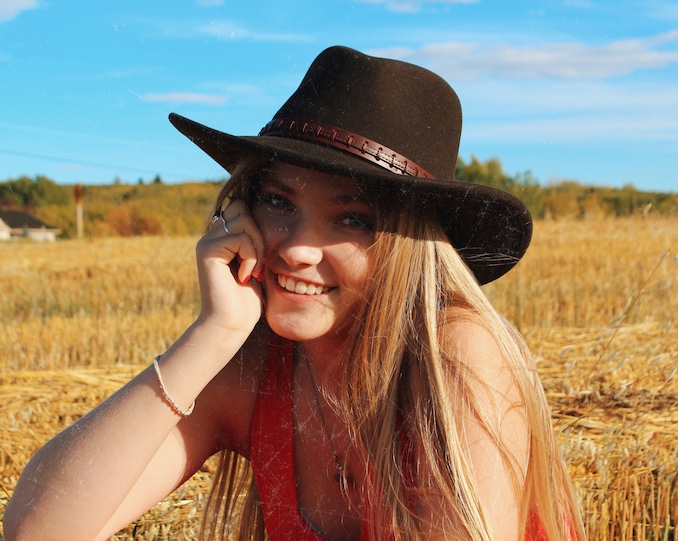 At only 16 years, Jennie is already a seasoned performer and has been captivating audiences from the Calgary Stampede to the Country Thunder stage for the last five years. Her love of the written word inspires her to capture and create the perfect message for each of her songs. She is involved in every part of the creation of her music, from writing, to recording and producing them so that each one is authentically hers.

Jennie has now shared four of her original songs with both Canadian and International Radio as well as all Digital platforms. Her song ‘Bus Ticket’ won the Pop Recording of the Year at the 2018 Calgary Music Awards and her first original ‘Suitcase’, spent 10 weeks in the Top Ten Countdown of the Internet radio station Music Road Radio, winning her rave reviews. Jennie also co-hosts and performs at her own event, ‘Country Night Live’, in Calgary, AB which showcases local artists and supports local charities as well as brings together fans, friends and families to enjoy an evening of live Country music. For Jennie this is the perfect opportunity to share her songs and to be a part of a meaningful collaboration with other artists.

Not a day goes by when Jennie Harluk isn’t singing. It is the truest expression of who she is. She writes and sings from her heart, hoping that her music will touch you and stay with you long after the last note.

Founded: I’ve been singing as long as I can remember, performing and writing music for around eight years. I released my first song (Suitcase) in 2016 and have been releasing music since!

I currently do not have any albums

“A Ladybug Bakery and Cafe”

I’ve never been a band follower, I don’t really keep track and fawn over certain bands but I enjoy listening to them from “The Eli Young Band” “LANCO” to “ABBA” and “Journey”

“Don’t Stop Believing” by Journey. There is no other song in the whole wide world that makes my feet stomp louder, my heart beat faster or makes me sing louder. My dad and I host our own live music show called “Country Night Live” , an event for family and friends with live music and food! I sang “Don’t Stop Believing” as our finale and it was one of the most exhilarating times I can remember being on stage.

Whether it be for a competition, a gig or a show I almost always put my left shoe on first. Just for good luck!

I had the privilege of being apart of the Calgary Stampede Grandstand Show alongside “The Young Canadians Of The Calgary Stampede” in 2014. Joining us on stage was Annika Odegard who is a local artist now apart of the duo “Leaving Thomas” with Bryton Udy. I’ve worked with them both and they are great people and artists. It’s been great seeing all the work they’re doing and the awesome music they’re putting out.

I’m not super familiar with either of these parks but I did do a small show at Fish Creek during the summer so I’ll go with Fish Creek!

Complete night owl. Anybody who knows me knows on weekends I’m awake all night. I have school so I can’t completely function night after night on not much sleep but if I could I would most likely never close my eyes. There’s something so calm and peculiar about night time. I love being the last one awake in my house and I mentally cannot let myself sleep until I know everyone else is asleep too. I’m really interested in stars and astrology and I find a sense of peace when everything is so dark and quiet. It’s when my best ideas come out for music and projects I’m working on. Night is a special time.

I would Love to go on the road at some point, I’m kind of a home body but I love adventure and I think it would be a great experience. I Love the studio as well, being surrounded by people like me who understand my language is great.

My Dad and I are in the works of planning our next “Country Night Live”. I’m writing lots and recording as well. I will be releasing my next song “Fire” in the New Year and I am so excited to share it.

The acoustic-romantic pair, Amante Duo, is Hilary and Noel Amante; a husband & wife flute, guitar and vocal duo, based out of Calgary, AB. Performing for weddings, venues and special events, they carry a unique […]

“Five Minutes With” Brendan McLeod of The Fugitives

My name is Brendan McLeod. I play and songwrite for a folk group called The Fugitives and write poetry, fiction, and theatre shows. Name: Brendan McLeod Genre: Folk Founded: 2007 # of Albums: 5 Latest […]