Russell Broom is the JUNO Songwriter of the Year winner, Producer and Engineer nominee, and winner of multiple WCMA, AMPIA and SOCAN Awards.

Also, he is the producer of records, including Jann Arden “Descendant”, “Uncover Me”, “Jann Arden”, “Love is the Only Soldier”, “Greatest Hurts”, Art Bergmann “Late Stage Empire Dementia”, Kyle McKearney “Down Home”, Jason McCoy “We Are One” and “Christmas at the Grand”, and composer for CTV Series “Jann”.

As a guitarist, his live and recording credits include Jann Arden, Ian Tyson, Robbie Williams, Martin Page, and Josh Groban.

Father of two swell teenagers and husband of a restauranteur. 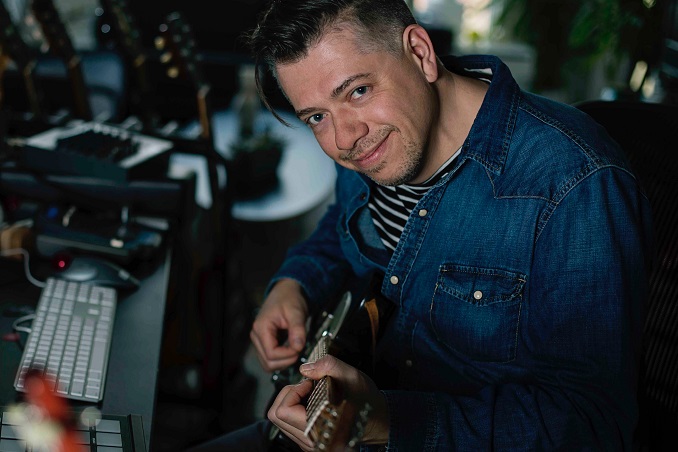 Music has been my job since I was 14

Kyle McKearney “Grandfather”, Jann Arden “Was I Ever 13”

“Can’t Get You Out Of My Head” Kylie Minogue

I love working early in the morning

Both are amazing and frustrating

Jann Arden “Descendant” that I co-produced with Jann and Bob Rock, Kyle McKearney’s new album is going to be terrific, we are 9 songs in and having a blast, a new Chixdiggit album is in the works, as well as some new songs from Art Bergmann. I really love producing records!

1st SW between 17th Avenue and 6th Avenue SW. So many great restaurants, bars, etc and feels like it’s always changing and evolving

Long and McQuade on 58th Ave SW and Guitar Shack

Felix Possak, a veteran performing artist residing in Calgary, AB, has performed well over 3,500 evening and school concerts in all provinces and territories (with the exception of P.E.I.). Felix has toured for FestivalConcerts(BC), OvertureConcerts(BC), […]

Guitarist Holly Blazina creates an immersive world of beauty and sound that draws in music lovers and Flamenco aficionados alike. The notes emanating from her instrument disarm unsuspecting listeners as they are ushered into an […]