Boris Cherniak is a Comedy Hypnotist. He was born in Russia and moved to Canada with his family at the age of ten. He has been performing in Kuwait, Qatar and Afghanistan as part of Operation H.O.T. – Honoring Our Troops, bringing entertainment to the soldiers. He also took part as an elite member of inspiring speakers of TED talks.

We had the chance to catch up with him to find out more about his style, influences and projects. 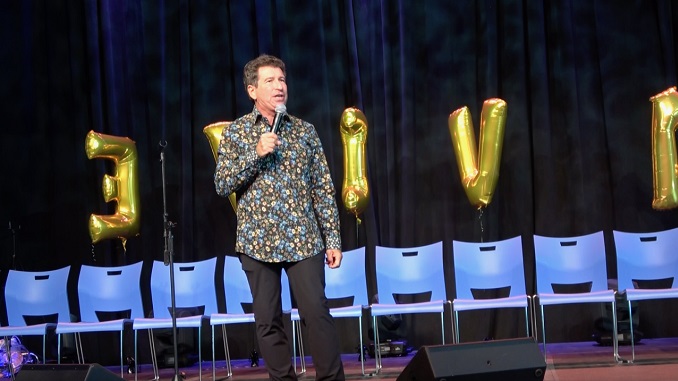 I am a comedy hypnotist – my comedy performance is presented using the hypnosis medium. I am a director of events, creating and interacting with the participants who believe the situations I create in their minds are real.

I didn’t have many influences, having started performing at a young age and not aware that anyone else was presenting comedy using the hypnosis platform. This helped my presentation style. Instead of emulating someone else’s teachings, I created my stage character from scratch, even though it was always an extension of me. This helped me stand out with unique content and an undeniable persona. However, Johnny Carson, David Copperfield, and the cast of the Carol Burnett Show have influenced my career.

There were many comedians I looked up to – From Yakov Smirnoff to Steve Martin and Tim Conway. But the one that made the biggest impression was Johnny Carson. I studied everything from his mannerisms to his delivery style. When I was starting out, I spent some time in California, where I attended tapings of the Tonight Show, starring Johnny Carson. This is also where I fell in love with show business.

Having been around comedy for most of my life, I enjoy a comedian who can touch sensitive subjects with grace, a well-constructed one-liner, and delivery to match. The best comedian today is Jimmy Carr. I have also worked with, booked, or enjoyed watching Ralphie May, Wendy Liebman, Dennis Wolfberg, John Pinette, and Mitch Hedberg.

I put together my set list, which I jot down in point form on a piece of paper. Just writing it down helps me remember the bits during the show, rarely needing to glance at the setlist. I regularly write new bits and update my material. The show always has a skeleton of what I intend to do. The new routines are sandwiched between proven bits, giving them the ability to shine. This way, when people see the show again, it always has a mixture of signature bits along with new topical skits.

My career took me around the world – Japan, Korea, Dubai, Bermuda, the Caribbean, and most of North America. Entertaining troops in Afghanistan and Kuwait was possibly one of the most exciting and terrifying at the same time. I was part of a celebrity team that travelled into the war zone. It was a very gratifying feeling to look into the eyes of soldiers and say thanks for their service and dedication. The soldiers were from the Joint Task Force and encompassed many nations.

At the beginning of my show, a participant is given a new name – CHIP. Throughout the performance, I constantly get the name wrong, while my hypnotized subject corrects me every time. The interaction with the name Chip is a running gag throughout the whole show and has limitless variations being interwoven into other routines, which I bring back often, and funnier with every new skit. I have written this bit because I had trouble remembering everyone’s name that volunteered to be on my stage. The reason I am proud of that skit is that it is incredibly memorable, to the point that it became my signature bit.

I find new comedians all over the internet. Specifically, podcasts and social media, which I browse during travel downtime or to occupy my mind while waiting to go on stage.

People from Toronto can only pronounce the first T

My book “You Can Do Anything” is available on Amazon and was just released on Audible, which I narrated. I am now writing my next book.

I am currently on tour performing at colleges, universities, theatres, and corporate conferences which include a motivational component.

Nick Wallace is probably one of the best magicians, comedians, and storytellers around. Love his stage persona, no holds barred delivery and dramatic reveals that make you want to say “how is that possible?”

Vong Show is a Comedian and Producer who refers to himself as the Official spokesperson for gay, super cute Asians. Growing up he always felt like the narratives in media rarely reflected his experiences or […]

Revival Brewcade: Just Don’t Put Your Beer on the Games

It’s 8:30pm on a Tuesday in Inglewood and comedian Matt Foster takes the stage at Revival Brewcade. “Love the combination of alcohol and video games,” he riffs. “Our parents thought we’d grow out of video […]

The Great Outdoors Comedy Festival is returning to Alberta! After debuting in Edmonton last year, this year the festival will be happening in Calgary at Prince’s Island Park from June 24th to the 26th, and […]