Bryan Moxon is a rising star in the Canadian comedy scene. He quickly found success on stage in Calgary and established himself as an act in high demand. His unique combination of quirky material, dynamic physicality and overall silliness will leave you in stitches. You may recognize him from his role in the short film ‘Berlin Castro’ which premiered at the Calgary International Film Festival in 2020. He has performed for Yuk Yuks and Craft Island Comedy, was a finalist in the 2019 FunnyFest comedy competition and is a Lethbridge Roast Battle Champion.

Prepare to be delighted by Bryan Moxon and join his comedic quest to fill the void in his soul with laughter! 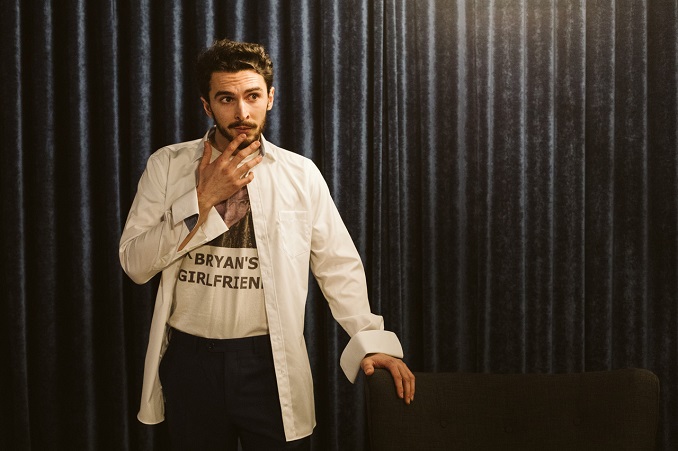 My comedic style is somewhat absurd, with a bit of physicality and facial expressiveness in the mix. I try to compose bits of multiple single-joke sentences. When interacting with the crowd I enjoy light roasting and always strive to be silly.

Louis CK, Bill Burr, Dave Chappelle and Dave Attell are a few names that come to mind. On the local scene, I’m influenced by Dale Ward, Steve Taddei, Juan Forno and Jeremy Furlong among others. Their impact extends beyond comedic style to the business of stand-up and life in general. But my main influence is definitely my wife, whom I love dearly, is one of the funniest people I’ve ever met and had the final say on what’s in this article.

Jerry Seinfeld. When I was in junior high (grade 9 I think) I performed some Seinfeld-Esque material at an assembly in front of the entire school. Bits included: Why do airplane windows not line up with the seats? Why is it so difficult to open a 12-pack of juice boxes? Looking back I was too naive to understand how poorly it could have gone, but fortunately, I got away with that one.

Louis CK. I find his storytelling style incredibly engaging and his honesty admirable, especially when dealing with the uncomfortable subject matter.

I write out my set list, making specific notes of new jokes and tags that I’m going to try. I’ll rehearse as much as I can, then right before going on stage I’ll look at the floor and take one or two deep breaths to calm myself.

The Comedy Cave is my personal favourite because they’ve given me so many opportunities, including my first headlining week. However, the best set I’ve ever had was at ArtsPlace in Canmore, which is a beautiful theatre with great audiences.

Probably the Dictator bit I have. I won’t give away what it is, but I feel proud of it because it makes people laugh, it’s fun to perform and also touches on the psychology of crowds without preaching a particular point of view or lesson.

I like to find new comics on Spotify because it allows me to listen to them while doing other things. I don’t usually have a ton of spare time to sit down to watch a special.

Forest Lawn is a tough part of town. You can tell it’s tough because as you’re driving in on the 17th the traffic lights have an advanced u-turn signal. That’s nowhere else in Calgary. Even the lights are like “Go home!”

I’ll mention Steve Taddy and Anton Matushyn because I was performing most recently with them and they’re good guys.

Matt Foster is a stand-up comedian that has travelled all over western Canada (and the world!) to share his craft! Matt is a natural on stage and makes stand-up comedy look easy. His natural charisma, […]

Brittany Lyseng is a Calgary-born comic whom you may know from her debut on CBC Gems’ “The New Wave of Stand-Up Comedy”, where she absolutely nailed it! This week we caught up with Brittany to […]