Craig DiLouie just published his new book, Our War, which follows a UNICEF worker and journalist who reveals the use of child soldiers in the second American civil war. 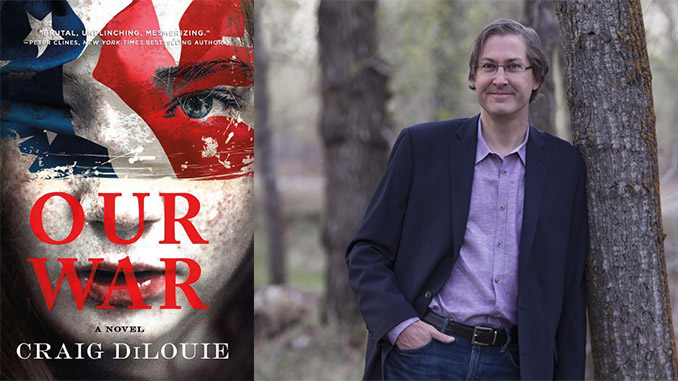 What does it mean to be a patriot when there is more than one America? Craig DiLouie’s dystopian thriller ​Our War​ presents a deeply affecting story about the tribalization of America and an alarming vision of what might happen if its cultural cold war ever turns hot.

A prescient and gripping novel of a second American civil war, and the children caught in the conflict, forced to fight. Our children are our soldiers.

After his impeachment, the president of the United States refuses to leave office, and the country erupts into a fractured and violent war. Orphaned by the fighting and looking for a home, 10-year-old Hannah Miller joins a citizen militia in a besieged Indianapolis. In the Free Women militia, Hannah finds a makeshift family. They’ll teach her how to survive. They’ll give her hope. And they’ll show her how to use a gun.

Hannah’s older brother, Alex, is a soldier too. But he’s loyal to other side, and has found his place in a militant group of fighters who see themselves as the last bastion of their America. By following their orders, Alex will soon make the ultimate decision behind the trigger.
On the battlefields of America, Hannah and Alex will risk everything for their country, but in the end they’ll fight for the only cause that truly matters – each other.

Craig DiLouie is an American-Canadian writer of speculative fiction. His works have been nominated for major literary awards, translated into multiple languages, and optioned for screen adaptation. He is a member of Science Fiction & Fantasy Writers of America, International Thriller Writers, and the Horror Writers Association. Learn more at ​www.CraigDiLouie.com.

“A Day in the Life” with Calgary writer Craig Dilouie

Craig Dilouie is a Calgary writer of many talents. His books span the speculative genres and, with his Crash Dive series, even into submarine thrillers. Nominated for the Horror Writer’s Association’s Bram Stoker Award for […]