Currently based in Calgary, Alberta, Jeanie Keebler started writing her own songs in 2010, self-releasing them in 2012, and began performing them live with her metal band, Ye Goat-Herd Gods, in 2014. With Gord Olson (Divinity, Demisery) on vocals, the music is extreme, but also draws heavily from the rich traditions of heavy, thrash, black and death metal. Bands such as Amon Amarth, Lord Belial, Immortal and Necrophobic are strong influences. The demo, Becoming Flesh, was re-released as an album in 2015, and a second effort, Ashes Shall Be Made of Them, came out October 31st, 2018. Bassist Matt Riley and drummer Matt Telgen toured the songs around regionally in clubs and festivals, with Jeanie and Gord. Jeanie Keebler is busy promoting the latest album, but is also beginning to carve out the next slab of genre-bending metal. 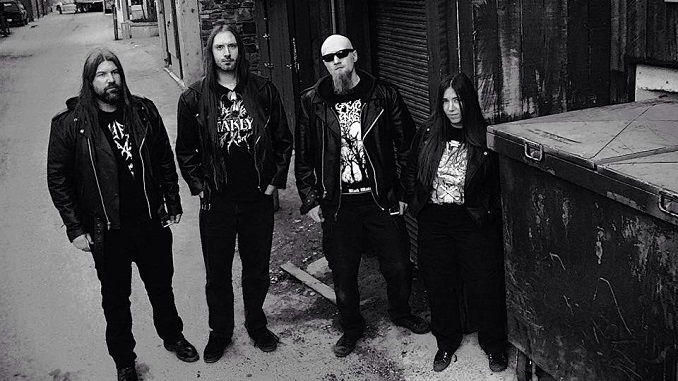 Latest Release: Ashes Shall Be Made of Them

“I was Made for Loving You”

Bumping fists with the audience

LP; great albums can take you on an epic journey

The road has moments I will always treasure, but the studio is where I can best express myself

We’re in the radio promotion stage, so call your favourite station and request a song!

I love Twitter. It is a perfect way to keep up with what my favorite people are up to, and all the happenings around the world. And recently, it is become the place to make […]

Nia Devetzis is a percussionist driven by the vivid and vast world of contemporary music, whether as a soloist or chamber musician. As a teaching artist, she is dedicated to education through performance and instruction, […]

“A Day in the Life” with abstract artist Mary-Jo Lough

Mary-Jo Lough has been drawn to art and creativity her entire life. It is within this space that she connects most authentically with herself and her environment. She is an intuitive artist who explores a […]