Scarlett Butler is a new Canadian music duo comprised of Troy Kokol and Joni Delaurier. But ask anyone in the Canadian country music industry and they would be known better individually for crafting songs you have probably heard on the radio.

After a decade writing songs for country artists (250+ songs over the last decade) with and for artists like Shane Yellowbird, Brett Kissel, Tenille Townes, The Higgins, Mike Plume and others, this talented duo stands on a solid foundation of well-crafted songs backed up by a soul-warming blend of harmonies.

Delaurier and Kokol met at a songwriting event in Calgary, Alberta. “I heard her song and was like, that girl will write a hit song one day,” said Kokol.

It turned out to be true, sooner rather than later. The two started dating and together took their first trip to Nashville. Soon after, they wrote Shane Yellowbird’s hit song “Pickup Truck”, which was listed as the #6 all-time song on Canadian country radio by Billboard and spent twelve weeks in the top 10 on BDS. This earned the pair nominations for Canadian Country Music Song and Songwriters of the Year, a SOCAN Award and opened many doors to collaborations with some of the best writers and artists on both sides of the border.

As recording artists, both have released solo records with Kokol earning himself solo nods for Male Artist of the Year at the Indigenous Music Awards in 2018. However, forming a duo is an evolution from the songwriting rounds they have played over the years, where they would sing harmonies on each other’s songs and records, and the million times they were told “you guys should start a band”.

During the pandemic, having sidelined some of their solo music ventures, it seemed like the perfect time. The pair wrote “Looking for a Lockdown With You” with some radio friends as a gag, which they recorded with Aaron Goodvin, Michelle Wright, Duane Steele and CBC Heartland’s Amber Marshall, raising funds for the Unison Benevolent Fund and garnering them their first top 50 on Billboard Canada charts.

Their new release “Love Me Like California” was inspired by their West Coast honeymoon and will be released June 21.21. 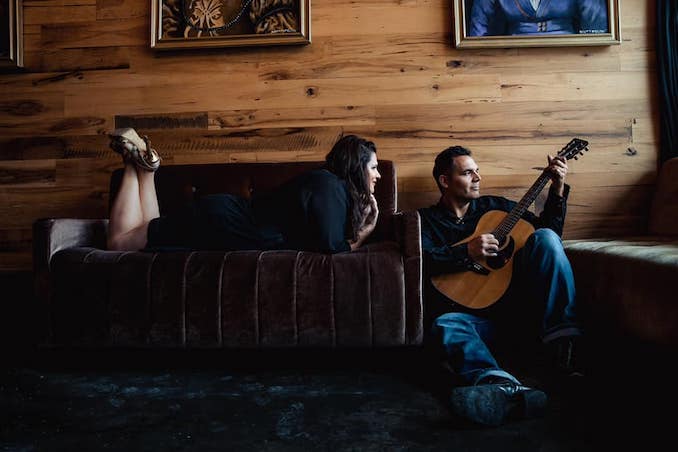 Latest Release: Looking For A Lockdown With You

Steve Miller and The Eagles (Troy); Bon Jovi, Poison and the Nitty Gritty Dirt Band (Joni). But we both listened to The Beatles that influenced us as young songwriters.

A lot of everything. We adore indie-folk group The Weepies, Ingrid Michaelson, Jason Isbell & The 400, Lori Mckenna, and Troy has a crush on Katy Perry.

Guilty Pleasure Song: I Want It That Way – Backstreet Boys. I mean, do we even feel guilty about it? It’s actually a great song.

Live Show Ritual: We’re married so we basically argue about who is the better driver on the way to the venue, then after the show, grab some food, put on pajamas and watch The Office reruns.

Early bird or night owl? Early birds, though Troy is an even earlier bird than Joni

Road or studio? Both. We love our little home studio in Montgomery, but we love to travel and meet people.

Any shows or albums coming up? We have some private socially distanced shows and are working on some dates when things reopen. Stay tuned!

Hi there, I’m Greta-Nova. I’m a timid but sweet girl looking for my forever home. My foster family describes me timid girl who loves her people. I am a little shy with new people especially […]

Calgary is a unique city in many ways. One of the biggest things that distinguishes us from other metropolitan areas is how we name our major thoroughfares. The word “trail” is used across our city […]