Alberta’s next provincial election could see two women competing to lead the province. If the NDP wins, Rachel Notley, currently leader of the opposition, would become the first woman in Canadian history to be re-elected as premier. If any of the four women in the current UCP leadership race become premier, Alberta would make history by having elected three different women as premiers.

The long-term consequences of having so many women competing for the UCP leadership could transform how women and girls think about political leadership.

Women leadership hopefuls are getting a lot of media attention. The current frontrunner, mainly due to her name recognition, is Danielle Smith, the former Wildrose leader who crossed the floor to join the Progressive Conservatives in 2014. She’s emerging as a favourite amongst a segment of conservatives who oppose COVID-19 restrictions and believe Alberta should aggressively assert independence from the federal government.

The other women in the race aren’t yet attracting as much attention, but they are serious candidates — all three are former ministers in Kenney’s government. Leela Aheer was Minister of Culture, Multiculturalism & Status of Women before being removed last summer for her criticisms of Kenney. Rajan Sawney and Rebecca Schulz both resigned from Cabinet when entering the leadership race. Sawney was Minister of Transportation and Schulz was Minister of Children’s Services.

The election could also be historical on another front. In addition to bringing different ideas to the table, Aheer and Sawney, come from Alberta’s South Asian community. If either of them wins the leadership, they’ll join Calgary’s mayor, Jyoti Gondek, in challenging a lengthy history of white male leadership.

Emerging research offers powerful evidence of how important it is to challenge the deeply entrenched association of political leadership with men.

A team of American political scientists studied how children perceive politics and found that when both boys and girls think of political leadership, they see it as masculine. When children from grades one through six were asked to draw a political leader, most drew a man. Ideas about gender roles and what sorts of things boys and girls are good at — sports for boys and sharing and caring for girls — emerge early and are reinforced by what children see around them.

Exposure to the political world, whether through watching the news with their parents, learning about politics in school, or taking field trips to provincial legislatures, reinforces the association between men and political leadership.

Girls don’t start out believing that politics isn’t for women, they learn it.

A few years ago, I toured Saskatchewan’s legislature. Not far from me was a group of elementary school children. The very first thing the children encountered was a room filled with photographs of former provincial leaders — all men. Looking at the young girls on the tour, I realized that if this was their first introduction to politics, they were learning that leaders do not look like them.

The good news is that women’s heightened visibility among UCP leadership hopefuls sets the stage for a transformation in how girls and women see political leadership. That’s because the many women in the race will generate a “role model effect,” activating women’s political interest. Researchers have documented this in several studies from countries around the world.

Two American scholars who focused specifically on teenage girls found that the record number of women running for U.S. Congress in 2018 improved how young women felt about democracy in their country compared to when the same girls were surveyed in 2016. Between now and October 6th — when the new leader is selected — teenage girls in Alberta, and across Canada, including racialized girls, are going to see people who look like them on the political stage competing to lead the province’s governing party.

Women are rising to the challenge of leadership, showing the next generation of potential leaders that there is space in politics for those who look different from past leaders. Future school children may stop drawing pictures of men when asked to draw a politician. 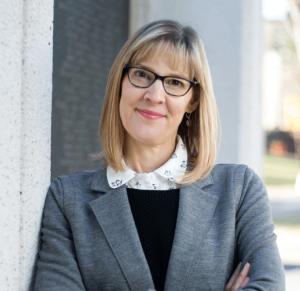 Susan Franceschet is Professor of Political Science at the University of Calgary.

“A Day in the Life” with Poet, Playwright, and Professor Natalie Meisner

Natalie Meisner is a playwright, award-winning author, mentor, and woman who never stops. Amongst the numerous projects Natalie has on the go, she always makes time to share her wisdom and experience with emerging artists. […]