Miesha Louie is a mixed-Secwépemc artist living in Treaty 7 Territory, and The Spanks are the many drummers who’ve stood beside her on stage. Sean Hamilton is her latest and longest partner, and together they’ve spent the last 5 years building and embellishing their garage-rock sound into something almost too big for two people to contain. Deeply influenced by proto-punk classics like The Runaways, MC5, Stooges, and 90s riot grrrl/grunge-like L7 and The Gits, Miesha & The Spanks conjure an energy that hits you in the face, throwing you into a world of killer riffs and sweaty gig venues. And it’s in those sweaty spaces that Miesha & The Spanks thrive, fresh off the highway, out of the van, and onto the stage. 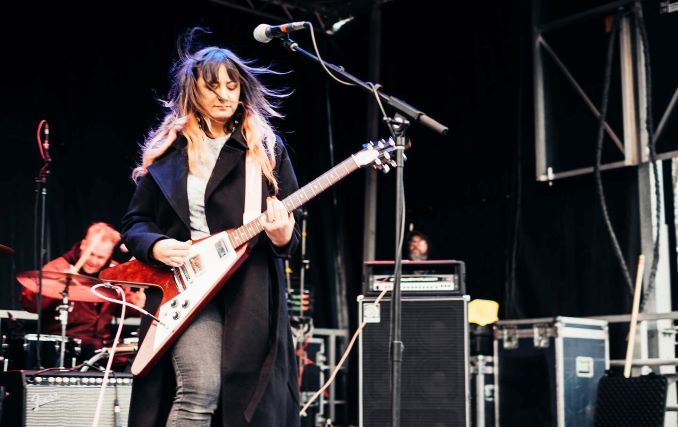 Miesha and The Spanks

4 full length, too many EPs

Amyl and The Sniffers

War by Edwin Starr is my jam

A sweaty hug on stage at the end of the set

Brand new cinematic music video for Mixed Blood Girls, collaborated with Indi City Studios. I am in the middle of Girls Rock Camp Calgary, and our showcase is Saturday, March 26th at the Ship & Anchor 2-6 pm featuring the camp bands and mentors too (so us!), plus we have performances at Winterruption in Edmonton (April 2 at Soho) and Big Winter Classic (April 9 at Broken City Patio).

17th Ave. I’ve been coming to 17th Ave since I was a teenager visiting Calgary for punk shows, and it’s always been really exciting. When I was a teen Sloth Records was in a basement a little off 17th Ave on 4th Street and now it’s upstairs in a beautiful space right on 17th. The Ship & Anchor is still standing and now you can add amazing pinball at Pinbar to the 17th Ave to-do list!

I love Rotary Park up Centre St N because it’s somewhere I can have my babies AND my dog. Also, it has a great view of the city and a lot of buds live in the neighbourhood.

Broken City is such a staple and support system to the independent music community! It did everything it could to be there for artists during on and off restrictions and is still standing, supported by the community that it’s supporting.

Sloth Records has been my go-to for many years. Lots of amazing local vinyl and show tickets!

My name is Mike Plume. At any given time I’m working on about 80 different songs. Some songs are almost done. Some are just thumbnail sketches. Some are co-written. Some songs I’ve been slogging away […]

A thunderous instrumental band, Father Moon begins anew with Shoegaze, Prog Metal, and of course downtrodden Doom. The guitar has taken center stage with singing melodies and varied textures while the bass maintains its central […]