Based on the last name of two ‘born and raised’ Albertan brothers, Flaysher is a CMAB Award-nominated Canadian country duo with grit in their blood, harmonies and unvarnished truths in their lyrics. Inspired by artists such as Bob Seger, Dierks Bentley, Bon Jovi and Dallas Smith, Flaysher’s songs are rooted in the influence of their upbringing. Raised in small-town Airdrie, Alberta, you can almost hear the sawdust in their voices from growing up on dusty job sites working for the family business.

Flaysher’s latest single, “Wild One,” has an undeniable energy and a melody you just can’t help but sing along to. The track was written by Nashville heavy-hitters Tebey, Emma-Lee and Karen Kosowski and produced by Dan Swinimer (Billy Currington, Tenille Townes, Madeline Merlo, Tim Hicks, to name a few). It’s a feel-good song about the kind of girl you know you can’t hold onto for long yet can’t help but try.

These true blue-collar boys are known for their high-energy live performances. Every time they hit the stage you can’t help but feel the passion they have for performing and lifting people up and those who are lucky enough to catch them in concert will feel enriched by a moment they won’t soon forget. 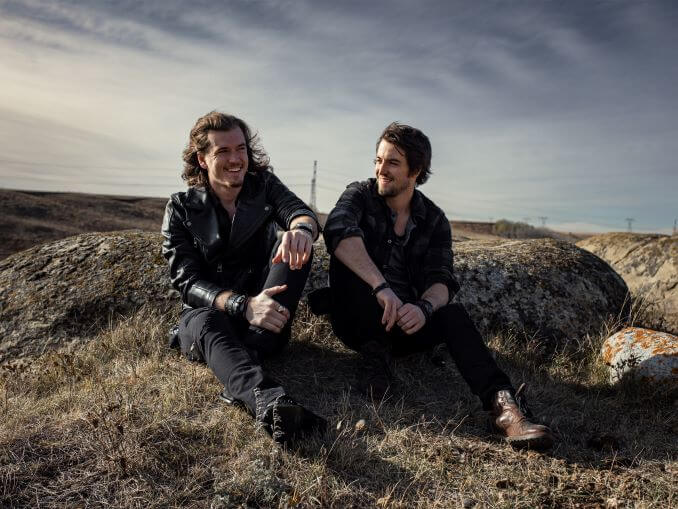 We played our first show in 2008 as a cover band but rebranded to Flaysher in 2015 with the release of our first all original EP.

Bob Seger has always been a huge influence, even as kids singing along in the back of dad’s old work truck.

A simple handshake with the crew before hitting the stage. It reminds us to be grateful to live out our dreams at any scale, and also to really live in the moment on stage.

“Wild One” is our big focus right now, but we will also be releasing a few other songs this year as we get closer to summer!

Main Street past Nose Creek Park in Airdrie. It’s nice to drive past nature in the park and the road has a lot of bends, which is more fun than a straight road when cruisin’ through town on our motorbikes.

Nose Creek Park here in Airdrie. It’s a big park with pathways and a large amphitheatre just off the water.

Our “Five Minutes With” feature this week is on Calgary-born country artist Aaron Pollock! Aaron is an old-school storyteller with a modern flair. Releasing his John Mayer-esque new track “Wildfire” on January 22nd, his last […]

Scarlett Butler is a new Canadian music duo comprised of Troy Kokol and Joni Delaurier. But ask anyone in the Canadian country music industry and they would be known better individually for crafting songs you […]

Doubling down on grit and authenticity, Mariel Buckley has planted her flag firmly as a songwriter who’s in it for the long haul. The polished glow of mainstream music holds no appeal for this emerging […]