Brittany Lyseng is a Calgary-born comic whom you may know from her debut on CBC Gems’ “The New Wave of Stand-Up Comedy”, where she absolutely nailed it! This week we caught up with Brittany to talk about roasts, her podcast ‘Life Pairings’, and about her brand new comedy album ‘Going Up’. 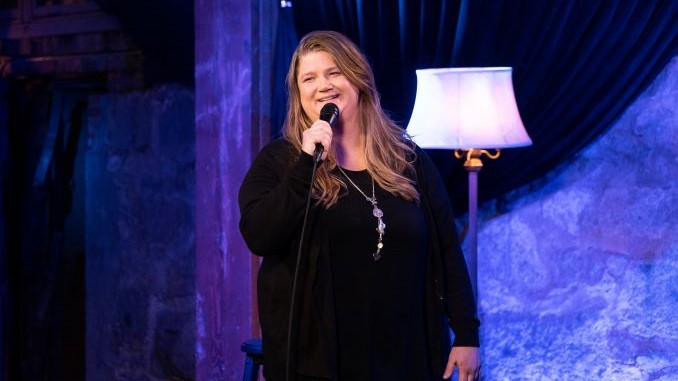 I love the drive to the show, I like to blast a song I know the words to and sing along to get my mouth moving and my heart rate up. Then I get to the venue about an hour earlier then I am supposed to, have a beer and quietly panic. Perhaps not the healthiest but a routine nonetheless.

A comedy club on Vancouver Island called Hecklers and a beautiful theatre called the Winter Garden Theater in Toronto are tied. Anywhere you feel like the audience is on your side and they trust you is the most incredible feeling. While completely different vibes, one a sports bar and the other a stunning old theatre. Both places I felt like they trusted me in these big moments of my career and I could just lean in and have fun. Those kinds of places and moments have an incredible effect. They can be game-changers.

Live! Get out to your local rooms. Every city has incredible spaces with new emerging new talent.

I do a podcast called Life Pairings; we pair life events with alcohol!

You can currently see me on CBC Gems, The New Wave of Stand-up, and on Canada’s Roast Battles available on CRAVE.

Tell us a joke about Calgary.

Does the c in c-train stand for “C I told you we would get you 35 km within your destination 45 min late”?

The irony isn’t lost on me that as I write this post I am sitting on a patio enjoying a frosty pint of craft beer. Nevertheless, prohibition has always intrigued me. Maybe it’s the rum […]

We had the chance to catch up with the comedian Barry Piercey about his roots, influences and his storytelling style! How would you describe your comedy style? I am definitely a Story Teller style of […]