Originally formed in 2011 under the now reviled former moniker, Illyrian have righteously cast off its anchors and let itself develop into a unique and hungry beast. This is, in no small part, due to the recent additions of Jeff Perry (bass/vocals, Sikarra, ex-Animus Labyrinth) and British drum sensation Darren May (drums, ex-Deacon Birch), who have brought new and progressive musical mindsets into the band. Rounding out the original and founding members Scott Onofrychuk (guitars/vocals) and Brandon McNeil (guitar/vocals)’s thrash metal madness in distinct fashion.

Cue 2016, as Illyrian is on the verge of releasing Round 2: Fight!, the band’s second release and more accomplished effort due out on October 7, 2016. Gone are the constraints of conventional metal sub-genre formula, replaced with a melting pot of technical thrash riffs, blistering solos, prog-influenced rhythms and the bands signature tri-vocal attack. 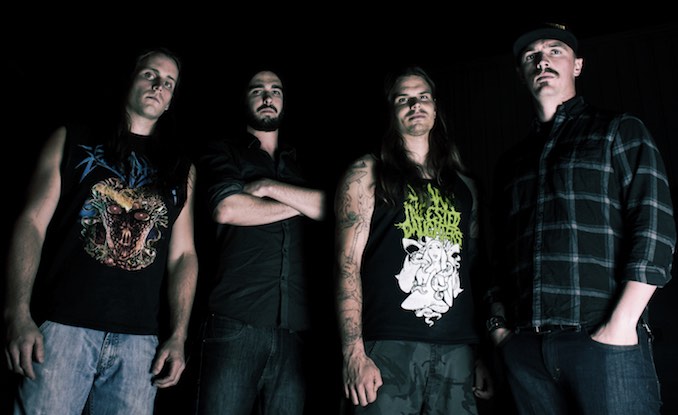 Mastodon, Revocation or Battle Cross it is a hard contest

Whatever that kissed a girl song by Katie Perry song is called.

ten minutes of warming up my feet with double kicks on a practice pad and all hands in and shouting “on 3!! DICKS”

There is so much talent in Calgary it is hard to pick one for me but to list a few Belvedere, WMD, Kyoktys, Racenous Eternal Hunger, Blackest Sin, Concrete Funeral, Krepitus, False Flag, The list goes on.

LP for longevity I think. EPs do have some gems on them sometimes, for example AFI’s All Hallows’ EP has Total Immortal on it.

The road is so much fun getting to meet new interesting people along with playing to new crowds and creating new friendships. That’s not to say I dislike the studio. The studio is all about getting down to business!!

Chicken in a curry beef in a burrito

Lake Louise in the Winter. Banff is too busy all year.

“A Blackfoot woman, caught in the act of adultery, was condemned at this site to have her nose cut off as a penalty for her actions. We do not know her story. The tribe cast […]

Father Moon hit the scene in the spring of 2018, and since then have spent most of their time in the studio cultivating their sonic identity. With slow and sludgy riffs, dark and heavy tones, […]