The band was created by Cale Savy during the Vancouver Riots in 2011. Cale Savy moved to Calgary where he started to form the first full lineup of Riot City, which debuted in 2014. It featured three other members, Dustin Smith, Ty Gogal and Roldan Reimer. The band released a demo in the summer of 2014 titled “Livin Fast”. 2016 saw the departure of Ty Gogal from the band. It would be early 2017 when Chad Vallier would replace him. After a couple of shows in the states, it was time to hit the studio. 2019 saw the release of their debut “Burn the Night” on May 17, 2019. One more big line up change would occur shortly after the release of the album as June 29th the band finally announced the newest member and vocalist Jordan Jacobs. 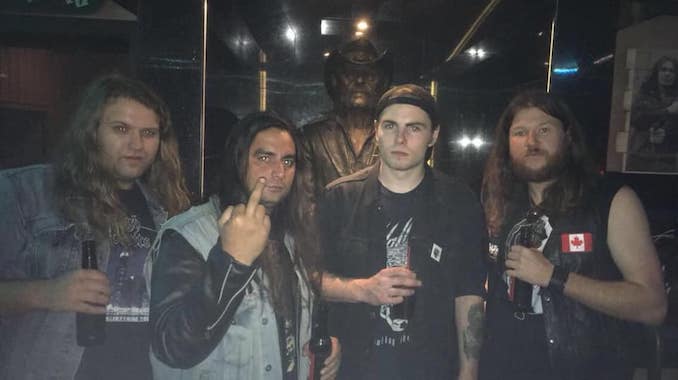 Latest Video: In the Dark

Being on the road is the best. You storm in. You destroy. You leave. And you do it all over again.

Behind us on the sidewalks. Or the streets. Preferably online on Facebook at https://www.facebook.com/RIOTCITYOFFICIAL/

Couple things in the works but nothing confirmed locally. 2020 we get to travel to Germany and Greece for the first time playing a couple of festivals.