Audrey Ochoa is a trombone player of jazz and contemporary music. She composes her own tunes, often with Latin influences, and has performed professionally in Canada and abroad as a member of several ensembles. In 2020 she was the winner of the Western Canadian Music Award (WCMA) for the Jazz Artist of the Year.

In 2014 she released her debut album “Trombone and Other Delights”, and in 2017 she released ”Afterthought”, her second album with Mike Lent and Sandro Dominelli. The last one recorded is called “Frankenhorn”, with pianist Chris Andrew, remixed by electronica DJ Battery Poacher, and introducing arranging strings with horns and a rhythm section.

We had the chance to catch up with her to find out more about her influences, life and projects. 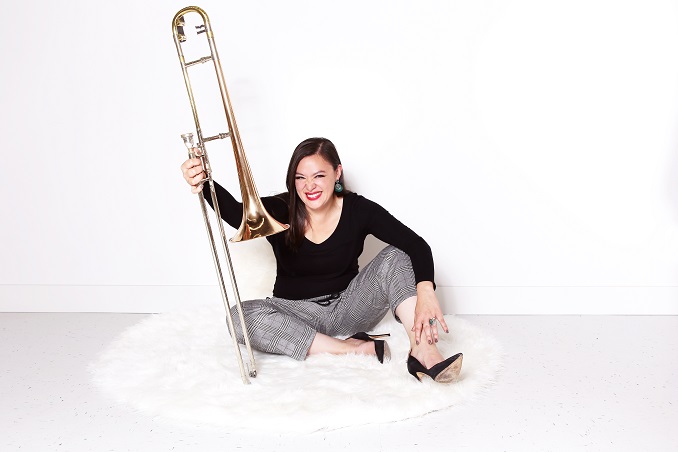 Have a mild panic followed by uncontrollable nervous laughter.

9th Ave – extremely walkable and no cars on Sunday.

Olympic Plaza for Festival- one of my favourite festivals in Calgary.

Born and Raised in Sundre, Alberta artist and songwriter Tate Irving writes from a place of authenticity and heart. His music takes on the struggles of daily life and growing pains, and re-imagines these as […]

Nia Devetzis is a percussionist driven by the vivid and vast world of contemporary music, whether as a soloist or chamber musician. As a teaching artist, she is dedicated to education through performance and instruction, […]