It took 67 shots on goal, over 75 minutes of playing time, a resilient outing by star goalie Jacob Markstrom and a snipe by All-Star forward Johnny Gaudreau. 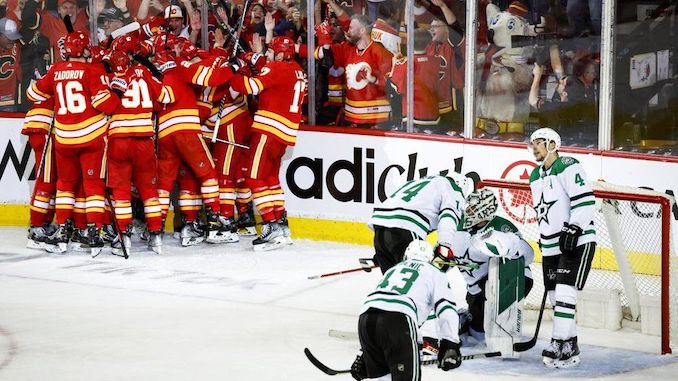 But the wait was worth it.

The Pacific Division winning Calgary Flames narrowly outlasted the heavy underdog Dallas Stars in overtime of Game 7 to punch their ticket to round two — setting up a dream “Battle of Alberta” showdown with the archrival Edmonton Oilers.

Stars goalie Jake Oettinger made 64 saves — many of them highlight reel-caliber — but Gaudreau’s snipe at the 15:09 mark of overtime ultimately sealed the series. Calgary won 3-2 in overtime and won their first playoff series since 2015.

Calgary’s thrilling Game 7 win came one day after a) the Toronto Maple Leafs were eliminated by the Tampa Bay Lightning in the decisive game and b) the Oilers outlasted the Los Angeles Kings in Game 7 to reach round two.

Canada’s hope of ending a 29-year Stanley Cup drought now rests in the hands of the Flames and Oilers. Although the beloved Maple Leafs are out, BetMGM Ontario customers can still place wagers on NHL games and other sports like golf, basketball, soccer and football.

He certainly wasn’t as busy as Oettinger, but Markstrom had to be sharp with 26 saves on 28 shots. The 32-year-old made several big stops in overtime to keep Calgary’s season alive, and “Marky” was finally rewarded with his trip to round two.

After reaching the 2004 Stanley Cup Final, Flames fans waited a painful 11 years until the franchise’s next playoff series win.

The drought finally ended in 2015, when the underdog Flames outlasted a more experienced Vancouver Canucks team in the opening round (six games). Calgary was ultimately ousted by the Anaheim Ducks in five games, and they wouldn’t reach the second round for another seven years.

The Flames were eliminated in the first round in 2017 (by Anaheim), 2019 (by the Colorado Avalanche) and 2020 (by Dallas). Most certainly didn’t expect this series to go the distance — let alone to sudden death overtime — but the Flames certainly aren’t complaining.

“We deserved to win,” head coach Darryl Sutter said after the game, per Wes Gilbertson of the Calgary Sun. “We took a hundred and some shots. If we’d lost, I know what you would have been saying. So we deserved to win.”

Sutter, of course, was the Flames’ bench boss during their unexpected run to the 2004 Stanley Cup Final that culminated with a heartbreaking 2-1 loss to the Tampa Bay Lightning in Game 7.

The struggling Flames brought back Sutter to replace the fired Geoff Ward in the midst of a frustrating 2020-21 season.

The legendary head coach cemented his legacy by leading the Los Angeles Kings to Stanley Cup championships in 2012 and 2014, but Sutter remains laser-focused on completing what he called “unfinished business” when the Flames rehired him last year.

One round down, three to go.

Right after Gaudreau put the puck past Oettinger, it was hard not to immediately think of these three words: Battle of Alberta.

The Flames and Oilers will finally meet in a postseason series for the first time since 1991. To think that there are multiple generations of Calgary and Edmonton fans that have yet to see a best-of-seven series featuring these two heated rivals.

Finally, the wait is over.

Calgary and Edmonton split the season series, with the home team winning each contest. The winner of this series will play the winner of the Colorado Avalanche-St. Louis Blues series.

Like Flames fans, Oilers supporters have waited quite some time for a trip to the Western Conference Final. Calgary last got there in 2004, and Edmonton hasn’t reached the final four since 2006.

The winner of the “Battle of Alberta” will not only get bragging rights, of course, but also the opportunity to bring Canada its first Stanley Cup championship since 1993.