When you think about the sport of surfing you likely picture turquoise water, radiant sunshine, bikinis and board shorts, bronzed bodies, and tropical oases in exotic locales. The City of Calgary, located in one of Canada’s landlocked provinces that feels the sting of winter for months on end, likely won’t invade your consciousness when imagining a surfer’s paradise. But there was a small contingent of neoprene-clad watermen willing to brave the elements to attempt something that, due to their geographic location, was thought to be impossible.

With no ocean for hundreds of kilometres, these individuals had to look at other bodies of water, such as lakes and rivers, in order to pursue their passion. Although Alberta is home to a large number of lakes their size and physical characteristics make them unsuitable for surfing, leaving rivers and their standing waves as the only viable option. Standing waves are created when fast moving water encounters a drop along the river bottom. The water goes over the drop and circulates on itself filling the void, thus creating the wave. Ocean swells are in a constant state of change and are dependent on variables such as wind, temperature, and weather systems. Standing waves, on the other hand, never move and are only affected by the river’s flow or a change in the contours of the riverbed. 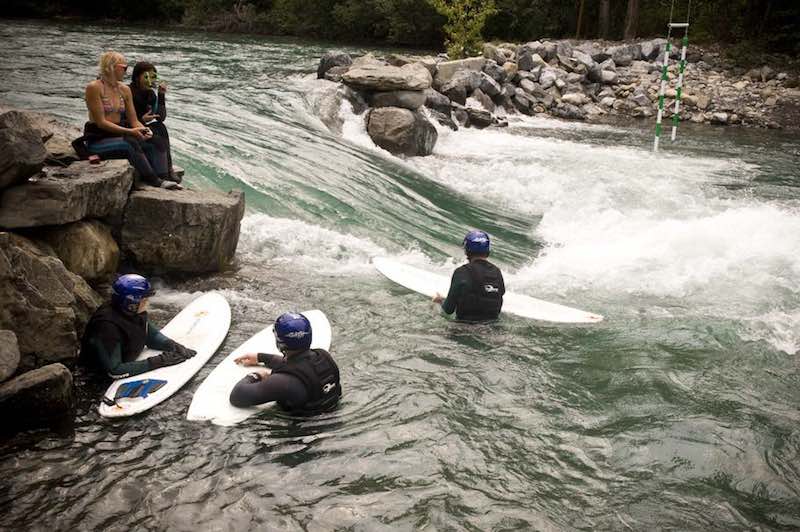 Prior to the floods of 2013 there was a prominent standing wave along the Kananaskis River appropriately named the Green Tongue. This is where Ben Murphy made the first Alberta river surfing attempt back in 2004. It would take over a year for Murphy to realize that he wasn’t the only one utilizing the Kan’s waves to hone his surfing skills. Jeff Brooks, Paul Barrett, Neil Egsgard, Jacob Quinlan, and Chris Szampanski were also surfing that same stretch of the Kananaskis and through a series of coincidental encounters between the surfers the initial framework for the Alberta River Surfing Association (ARSA) was born.

Over the next couple of years interest in the sport steadily increased and with that came media attention. The ARSA was featured in many local publications, including the Calgary Herald, 24 Hours, FFWD Calgary, Calgary Inc, and Swerve. They were even prominently featured on the cover of Surfer magazine…twice! They were the first organization to host a river surfing competition outside of Munich, Germany, the birthplace of the sport, and had over 150 active users on the website’s forum, engaged in discussions about gear, board building, wave locations, and more. Even this writer was swept up in Alberta’s surf craze; buying a board and a wetsuit and trying my luck on the Green Tongue with other newbies. With all of this optimism the sport’s future looked bright, but it all came to a grinding halt in 2008 when a construction project along the Kan destroyed the waves, leaving the surfing community with nothing close to home. To make matters worse the wave under the 10th Street Bridge in downtown Calgary had collapsed in on itself effectively eliminating the only surfable wave within the city limits and the majority of the surfing community along with it.

The subsequent years were bleak for the ARSA and its few remaining members. Most of the “surfing” events were held at local watering holes instead of on the river and any surfing that actually happened occurred out of province and even out of the country. Although there were other surfable waves in Alberta, they were a minimum two-hour drive from Calgary, located on very shallow and challenging rivers, and only appeared for three months of the year. I sold my river board and started mountain biking instead; not an easy transition, but one that looked more promising at the time. The Green Tongue was eventually rebuilt, albeit better suited for kayakers, but the surfing scene in Alberta largely remained at the grassroots level. Neil Egsgard, the president of the ARSA, with the help of Jacob Quinlan launched riversurfing.ca; an all-encompassing website dedicated to river surfing culture. Their goal was to promote river surfing worldwide and redevelop Alberta’s surf scene in the process. 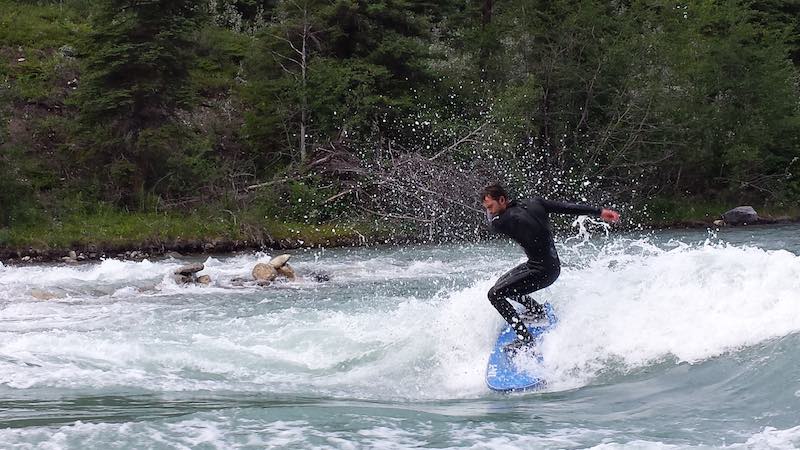 Egsgard became immersed in the wave building process and was fixated on designing the perfect wave for southern Alberta and sharing that knowledge with surfers everywhere. Egsgard’s vision came to be known as the Surf Anywhere project and the ARSA became a registered society as a way to officially raise funds for wave building projects. Surf Anywhere designed and built a couple of small waves on the Kananaskis prior to June 2013 when they were all wiped out during the one in one hundred year floods. Despite a variety of setbacks, including the aforementioned flooding, Egsgard’s dream of good waves on the Kananaskis River was realized this past spring when three surfable waves were built. The gold standard of a river surfing wave was realized last spring, making Calgary a burgeoning surf town as well as a hot spot for western culture.

After a generous offer from Quinlan’s Rocky Mountain River Surfing (RMRS), a company he manages after its founder, Jeff Brooks, moved to Ontario, this writer found himself back on a surfboard in the icy waters of the Bow River. Quinlan’s lessons feature dry-land training, a river safety talk, and lots of hands-on time in the water. Although I wasn’t able to stand-up and actually ride the wave, it was just as addicting as ocean surfing. My skills aren’t up to par to hang with members of the 10th Street Crew, but it was still a lot of fun trying! If you’re looking to get into river surfing or would just like to try it out, I would highly recommend a lesson from an experienced guide to get started, as there are differences between river and ocean surfing that you might not be aware of. You can contact Quinlan via the RMRS website or you’ll likely him find him at the 10th Street wave Wednesday evenings. In addition to RMRS, you can also rent equipment from Undercurrents or purchase gear from Red Nik Surf.

Once again the future of river surfing looks bright in Alberta. Thanks in part to the efforts of Egsgard and Quinlan, the ARSA has seen an influx of new memberships and that number is likely to grow as planned developments for the Kananaskis and Harvie Passage begin to take shape. Maybe the sea green waters of Alberta’s rivers, coupled with breathtaking mountain vistas, incredible wildlife sightings, and a dearth of crowded beaches will be enough for river surfing to compete with its established ocean cousin. Then again it’s tough to compare a wetsuit with the suggestiveness of a bikini, but here in southern Alberta neoprene is sexy! 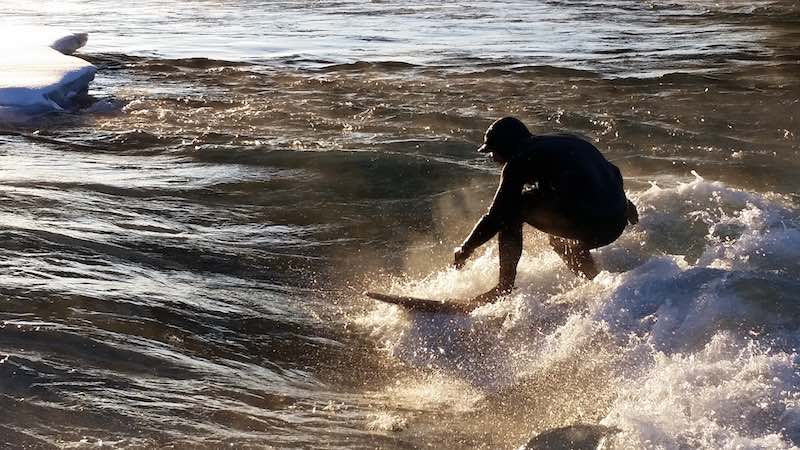 This story wouldn’t have been possible without the time, effort, and generosity of Jacob Quinlan and Neil Egsgard. I wanted this story to be accurate, fair, and appealing to Calgary’s surf scene and those two helped ensure that was possible. To stay up to date with Alberta’s surf scene make sure you like the Alberta River Surfing Association, Rocky Mountain River Surfing, and Surf Anywhere on Facebook. In addition you can find Jacob Quinlan on Instagram. See you on the river!

Historical Photos of Tornadoes and their Destruction

I have fond memories growing up in Saskatchewan and watching storms rumble across the prairies. I clearly remember driving out to the grid roads and gazing in awe as these massive storm cells rolled over […]

Darwin the Dog needs a loving home in the Calgary area

Meet Darwin Hello there I’m Darwin…. and I would love to come home with you! I grew up with the kids in my previous home, which means I might be the best dog for your […]

Historic Individuals that Calgary’s Bridges are Named After

As a follow-up to my previous post, Historic Individuals that Calgary’s Major Roads and Trails are Named After, I am sticking with a similar theme and uncovering the stories behind some of Calgary’s landmarks. For […]