Now based in Calgary, Alberta and born and raised in Sudbury, Ontario, folk-pop singer, songwriter and designer Justine Giles – drawing inspiration from artists including Sheryl Crow, Alanis Morissette and Kacey Musgraves – has found her own voice. Her acclaimed newest single, “Save Myself,” is her most powerful and personal effort to date. Justine Giles evolution has been a “wild ride”; she participated in Canada’s Music Incubator (CMI) program in 2017, she was featured on CTV’s Marilyn Denis Show in 2020 and was named Calgary’s finalist in the 2020 Jim Beam Virtual National Talent Search (staged in conjunction with Canadian Music Week). Previously, she released her debut album titled ‘Shine’ in 2014, which generated singles, “We’ve Got a Light” (2014) and “Sparks” (2015), plus, she released a self-produced single “Unspoken’ in 2016 (a first-place winner in northern Ontario for the 2017 CBC Music Searchlight Awards) and she released singles “I’m Done” and “I Got To Your Heart” in 2017, and “Poppy” in 2018. 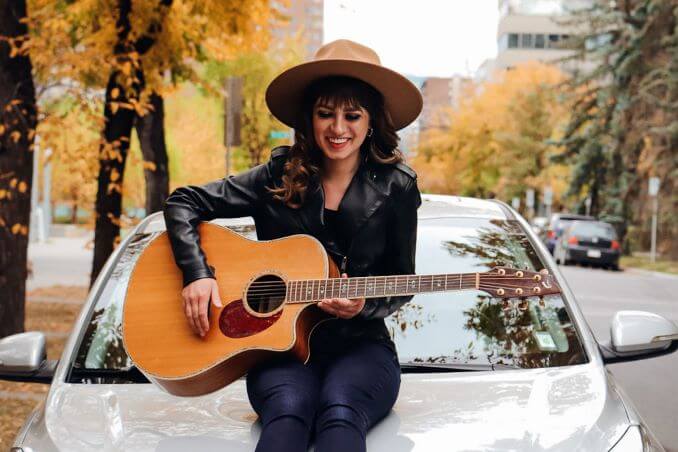 I Want You – by Savage Garden.

Time alone to breathe and get grounded backstage.

My next release is my new single “Another Chance” coming in summer or fall 2022 – made with support from ATCO Energy (grand prize winner of “Our Comeback” contest), OCL Studios, The Prophet’s of Music and Worthington PR.

So hard to pick just one. Vegan Street Tacos or Market (their Brussels sprouts are to die for).

9 Ave SE (Inglewood) – it’s a vibrant part of the city with lots of local shops, cafes, and music venues. Also close to the river and makes for a beautiful place to walk.

Megan Dawson is a country/pop artist and songwriter from Calgary, AB. In July of 2021, she was nominated for the YYC Music Awards “Solo Artist of the Year.” Dawson has previously been selected to participate […]