Though many do not associate the Great White North with gambling, Canada’s stance regarding games of chance and sports betting is quite progressive compared to most US states. Naturally, each province can pass its regulation concerning betting activities, and all of them allow at least a few forms.

According to the latest statistics, Canada is home to more than two hundred licensed gambling establishments offering over seventy thousand slots and twenty-two hundred table games. Naturally, when the latter category comes up in conversation, people mostly think of blackjack or baccarat. Yet, an underrated table game genre gaining massive steam in recent years is casino poker. These are player versus dealer games that get played at speeds comparable to those at twenty-one and baccarat tables but utilize a poker hand-ranking system that anyone that has picked up a deck of cards knows. 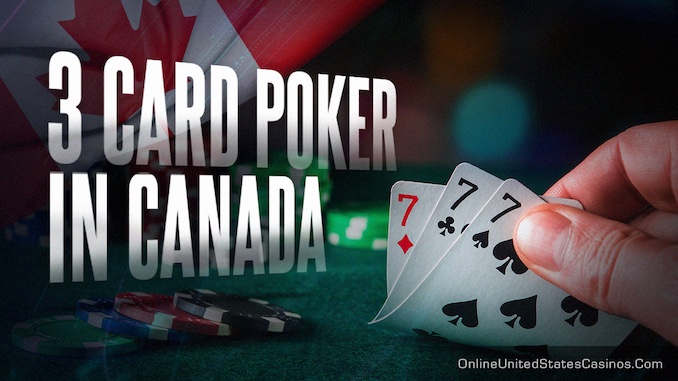 The most famous product in this table game sub-genre is 3 Card Poker, invented in 1994 by Derek Webb, now licensed by Shuffle Master to venues worldwide. Its ruleset is similar to that of the British Brag, which many argue originated from the Italian Primero. Each round starts with an ante wager, after which both player and dealer receive a three-card hand. Depending on its strength, a gambler can hold or play, with playing meaning comparing his cards to those the dealer has. The one with the better card combo wins.

3 Card Poker is an exciting casino product available at multiple establishments across Canada. Of course, the number of online 3 Card Poker options is also vast, but those who wish to experience its thrills inside a real-world gaming floor should do themselves a favour and visit the four listed choices below.

When compiling any list of Canadian casinos, it is hard to leave out the Fallsview Resort, overlooking the world-famous Horseshoe Falls in Niagara Falls. It is not only the most massive spot of its kind in the country but also the most elegant. Opened in 2004, this is a $1 billion complex, an essential part of the Niagara skyline, built on a former transformer station of the Ontario Power Company. Mohegan Gaming runs it, but the Ontario Lottery and Gaming Corporation (OLG) owns it.

The casino area of this property stretches over 200,000 square feet. That is far more sizeable than most top-end Vegas locations. Inside this space, patrons can find three thousand and five hundred slots and one hundred and thirty gaming tables. The latter feature Ultimate Texas Poker, Pai Gow, Let it Ride, Mississippi Stud, and 3 Card and 4 Card Poker. The last two offer the 6-card bonus, paying 1000:1 odds for a Royal Flush.

Located on 5899 Rama Road in Orillia, Ontario, Casino Rama is likely the second-most-famous gaming spot in all of Canada. It is by far its best-reviewed, open 24/7. The OLG partnered with the Chippewas of Rama First Nation owns this property. Yet, Gateway Casinos operates it. It got up and running in 1996, boasting a casino floor that sprawls 192,000 square feet.

There are around one hundred and ten table games here, with a few of them providing 3 Card Poker, Pai Gow Poker, and Caribbean Stud action. Gourmands, a fancy word for foodies, can test out ten restaurants inside this resort, with St. Germain’s serving AAA Alberta beef.

Here is an Ottawa casino, which parties rising or visiting Canada’s capital can visit on 4837 Albion Road South, in Gloucester. Currently operating as the Rideau Carleton Casino, this venue will soon undergo a rebrand and become Hard Rock Ottawa, as Hard Rock Hotels runs it, under OLG’s ownership, as same as virtually all high-end gambling establishments throughout the land. While a popular destination for games of chance mavens, the Rideau Carleton is more renowned for its racetrack, which features harness racing.

On the casino side of things, Rideau Carleton gamblers can enjoy all the traditional table classics, plus multiple casino poker variants, among which is 3 Card Poker. Straight Flushes here pay 40:1.

As is the case with the Fallsview Resort, Mohegan Gaming also runs the day-to-day operations of Casino Niagara. It got up and running in late-1996, on 5705 Falls Avenue, in Niagara Falls, on the spot of the old Maple Leaf Village amusement park. Casino Niagara is notable because it is the first gaming venue to feature electronic roulette in Canada in the late-1990s. These days, it has a retail sportsbook, over a thousand slots, and 40 table games.

Most of the table products here are a mirror copy from those at the Fallsview Resort, given that they both get managed by the same company. The on-site dining options here include the LEV2L Sports Bar, Perks Café, and Market Buffet.