Third Chamber is comprised of several musicians with a long history in Calgary’s metal scene (Featuring current members of Culled, After Earth, Meddigo, False Flag and former members of Thorazine, WAKE, Disciples of Power, Exit Strategy, We Found the Body & Razorwing). The quintet is cooking up a new, yet familiar death metal sound that will nourish even the pickiest of metal enthusiasts.

With death being the main ingredient in their metal melting pot, hints of grindcore and hardcore also stand out amidst flavours of politically charged lyrics. THIRD CHAMBER is not music for the soft, besides being musically ferocious, the lyrical content is a brutal reflection of the current state of the world. From negative motivations of religious organizations, the effects of social media on mental distress, the ever-growing pride of ignorance, the exploitation of our natural resources for the profit of the wealthy and the manipulation and lack of actual truth in most media consumed by the ever-growing bewildered herd.

Recently, THIRD CHAMBER  self released their debut five-track EP, “Harvesting Our Decay” on Limited Digipak CD, Limited Cassette as well as on numerous, digital platforms such as iTunes, Amazon, Spotify and Bandcamp. 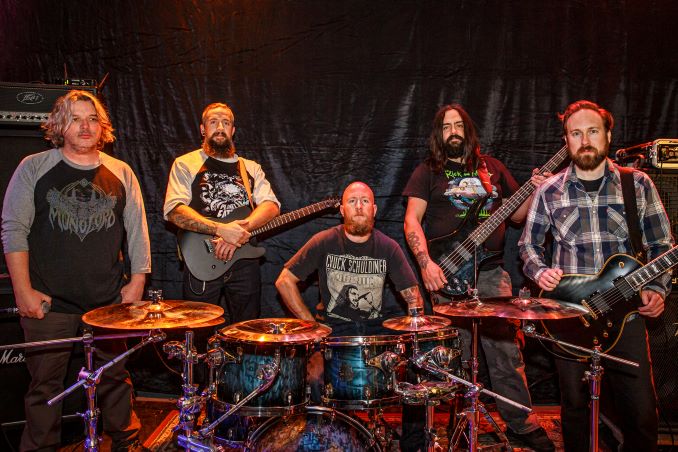 Jamie – Max 2 beer, bit of food, stretch, set run through on guitar. One hoot. Maybe two 😉
Jay – Beer and a Toke
Shane – On the spot meditation

Dustin – Both actually. But if I were to choose 1 it would be the studio, love the environment and atmosphere.
Jamie – Studio
Jay – Road! That’s where all the fun is!
Shane – Studio